Last week I was asked to become a regular contributor to The South African, a publication for South Africans all over world, but mostly based in the UK. I was so excited to be asked and couldn’t wait to start writing, despite having quite a busy schedule between family, work, running a Facebook group (which takes way more time than you would think!) and writing this blog. 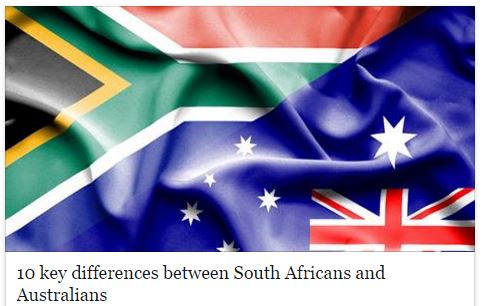 I was given several topics to write about and I suggested a few as well. One of the topics was briefed as a light-hearted piece entitled ‘10 Differences Between South Africans & Australians‘. I wrote it in less than a couple of hours and emailed it off to The South African, who said it was great and scheduled it to be posted and shared on social media.

Within minutes of the post being shared on Facebook, the comments, likes and shares started flowing. I saw the article being shared on some groups as well and that’s where my inspiration for this blog post came from. Instead of people having a laugh or commenting on points they agreed/disagreed with, out came the charming expats with chips on their shoulders. Really big chips.

As the author of the article, I got psychoanalysed like never before. Well actually, like once before, when I wrote this open letter from a South African expat. Out came all the haters judging me for daring to ‘have a go’ at Aussies/Australia/South Africans/South Africa. I was called all manner of names under the sun. Here are just some of the comments I saw (who knows how many there were that I didn’t see!): 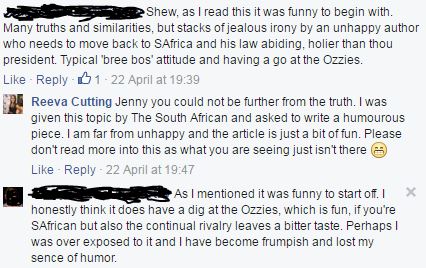 Now really, was any of that necessary? I love the quote that says ‘Before you speak, THINK. Is it True? Is it Helpful? Is it Inspiring? Is it Necessary? Is it Kind?’. I’d have to say no, on all counts.

So my question is, when the hell did everyone lose their sense of humour? I’m not sure how anyone could read that article and take it 100% seriously. Why do these people feel it is their honour bound duty to defend whatever they perceive as being attacked? And not just defend, but actually attack others. It’s great you feel so passionate about things but seriously, take a long, hard look in the mirror before you start transferring your emotions to me.

No, I do not need to move back to South Africa. I am perfectly happy living here in Australia. I LOVE Australia! This country has given me and my family a safe and wonderful place to live and bring up my child. I have made so many friends here and would not change my life for the world. However, I also love South Africa, the country of my birth. I also have great affection for England and Ireland where I lived before moving to Australia. Why can I not love and feel allegiance to more than one place/nationality? Maybe these people cannot see that it’s possible to love more than one country, and be able to joke about them all at the same time.

If anyone of these people bothered to look at this blog and see what I am really about, they make have decided to hou their beks (but then again probably not). This blog is all about migrating to Australia, from anywhere in the world, and about life in Perth & WA. And if you read any of my posts, I would think you would be able to see that.

So if you’ve got this far and really want to see what I’m about, here are some migration posts you should check out:

8 Awesome Places To Get Advice About Moving To Australia

Choosing A City: Why You Should Migrate To Perth

5 Signs You Are Ready To Migrate

I also love supporting local businesses and featuring them on the blog:

But I guess it’s easier to read one post on an external website that has my name attached to it, and then jump onto social media and personally attack me for no good reason other that the fact that you have taken a humourous article way too seriously.

I think I’ve learnt that next time this happens, because unfortunately there will always be a next time, I just need to ignore the trolls. They clearly have more issues than anyone can shake a stick at so there is no point even engaging with them to get my point across. They can and will never get my point as they just don’t want to. They would rather hide behind a screen and type away.

One of my readers (who also commented on one of the posts that shared the article and got attacked for her efforts as well), said it best (thanks for allowing me to share your words):

“…social media is impossible, something is always going to be misinterpreted…don’t let them get to you, we are damned if we do and damned if we don’t, anyone who takes 10 s to see what you are about would immediately know that that article was not serious, or taking a dig at the Aussies at all…….the ones who are getting so defensive are the ones with a really big problem, but they are also the ones who are so know-it-all and full of BS that they will never see reason from any place other than the mirror” 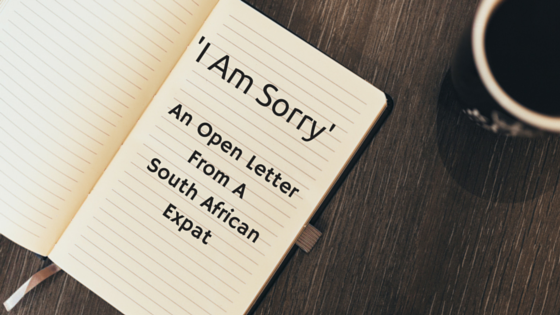 How To Find A Job In Perth

My Ultimate Migration Playlist - Songs To Get You Through Migrating